The Saint Nicolas Parade in Épinal

The Saint Nicholas parade in Épinal is a musical and visual show with floats that wind through a 3-kilometre route.

On Saturday, first weekend of December

In Épinal, Saint Nicholas is traditionally celebrated on Saturday during the first weekend of December. The evening marks the start of the festivities for this month of traditions and lights. On Saturday, brass bands and decorated floats invade the streets of the town for a large popular parade illuminated and adorned with a thousand colours.

Brass bands, folk groups, artists and talented sportsmen come to animate the fabulous procession of floats, each one more beautiful than the other. Saint Nicholas closes the parade, followed by Father Fouettard. The first is acclaimed while the second is booed by the crowd. This is a magic, popular and endearing parade where everyone falls back into childhood.

Snow White and the 7 dwarves’ house is animated. They are all busy around a steaming casserole or sawing wood for the fire, while throwing candy at the amazed children. The Hockey Club of Épinal demonstrates technical passes on a mini rink, mounted on the trailer of a tractor and under the encouragement of their cheerleaders. On a wooden float, the students of the ENSTIB school (École Nationale Supérieure des Technologies et Industries du Bois d’Épinal) demonstrate their talents by playing their instruments. Shrek, the friendly green monster from a well-known animated film, towers over the audience, accompanied by his friends the donkey and Puss in Boots, closely followed by Sleeping Beauty in her fairy-tale castle.

Heritage and culture in the spotlight

A mountain of sweets made ouf of delicacies created with passion by the apprentices at the “Pôle des Métiers” slowly parades through the crowd and makes the mouths water. A miniature version of the Chinese Tower in Épinal puts heritage in the spotlight, thanks to the work of the artists of the association "Société des Fêtes". Between each float, the dance clubs of Épinal and the surrounding areas create a fantastic atmosphere with choreographies designed especially for the big day. Equestrian clubs walk their mounts: horses and ponies with braided manes are dressed to the finest and mounted by proud costumed horsemen. Saint Nicholas closes the parade on a bright chariot, accompanied by angels and applauded by the crowd as the children marvel. Just behind him, Father Fouettard rings his bell in the middle of the fir trees, booed by the spectators.

The parade finished, Saint-Nicholas takes off and crosses the Moselle River after giving his traditional speech, making way for the 30-minute, exceptional pyrotechnic show. You will have the opportunity to discover the next Saint Nicholas parade on Saturday the 8th of December 2018. 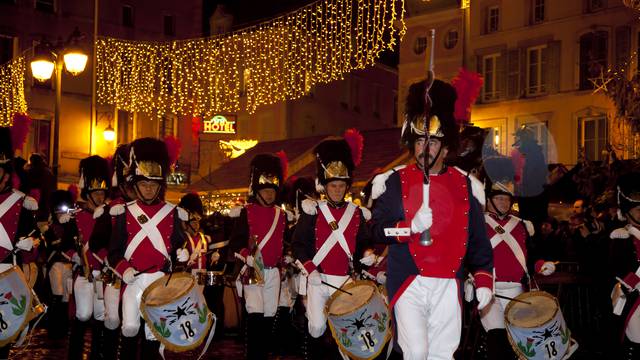 The Program for Saint Nicholas’ festivities